2). Initial stage
Because the performance of whitelist sites in the blacklist campaign is good, so the whitelist campaign conversions is still as good as ever.

4). Maintenance phase
As the ROI is okay and the profit is enough to cover the cost of testing, so in addition to adjusting the bid a few times, the rest is basically not adjusted.
Now the campaign is in this stage. 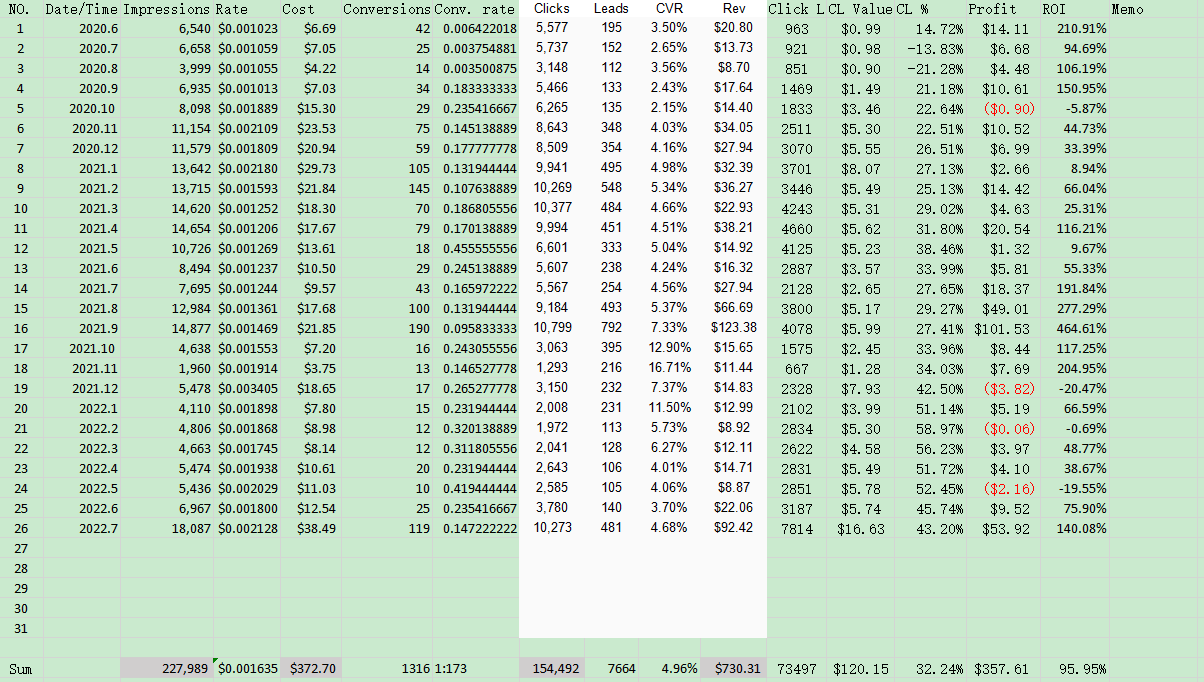 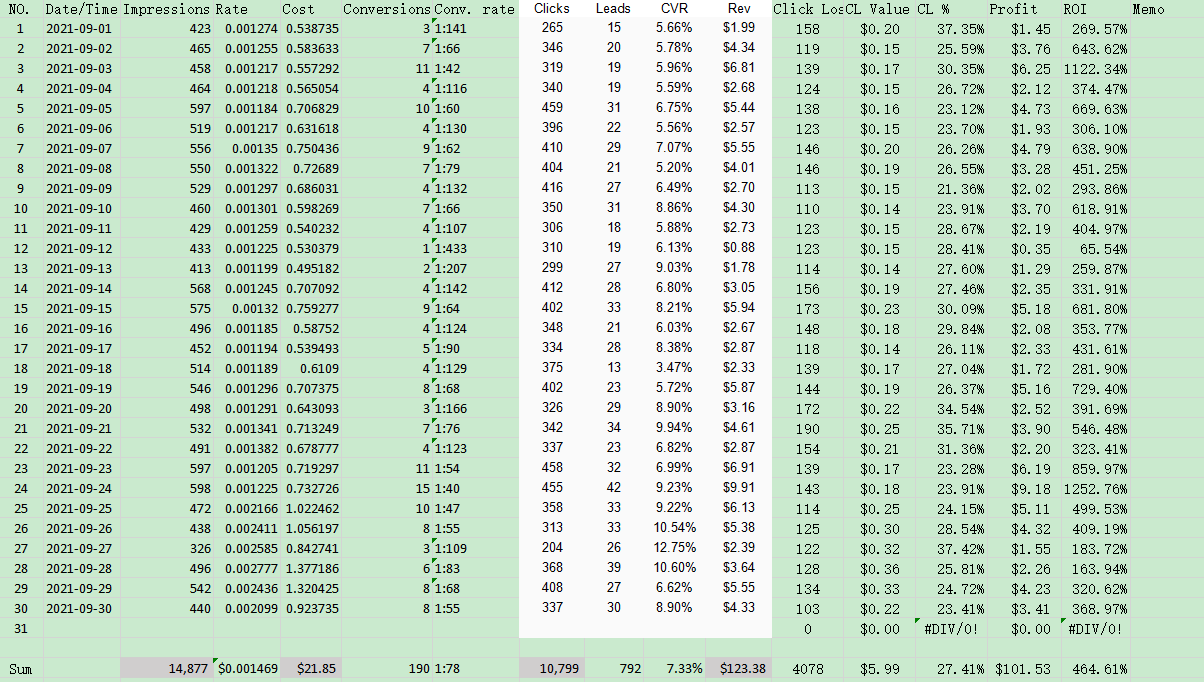 Traffic prices are not very high, ROI reached nearly 500%, the initial inference is that the competition is not too hot. 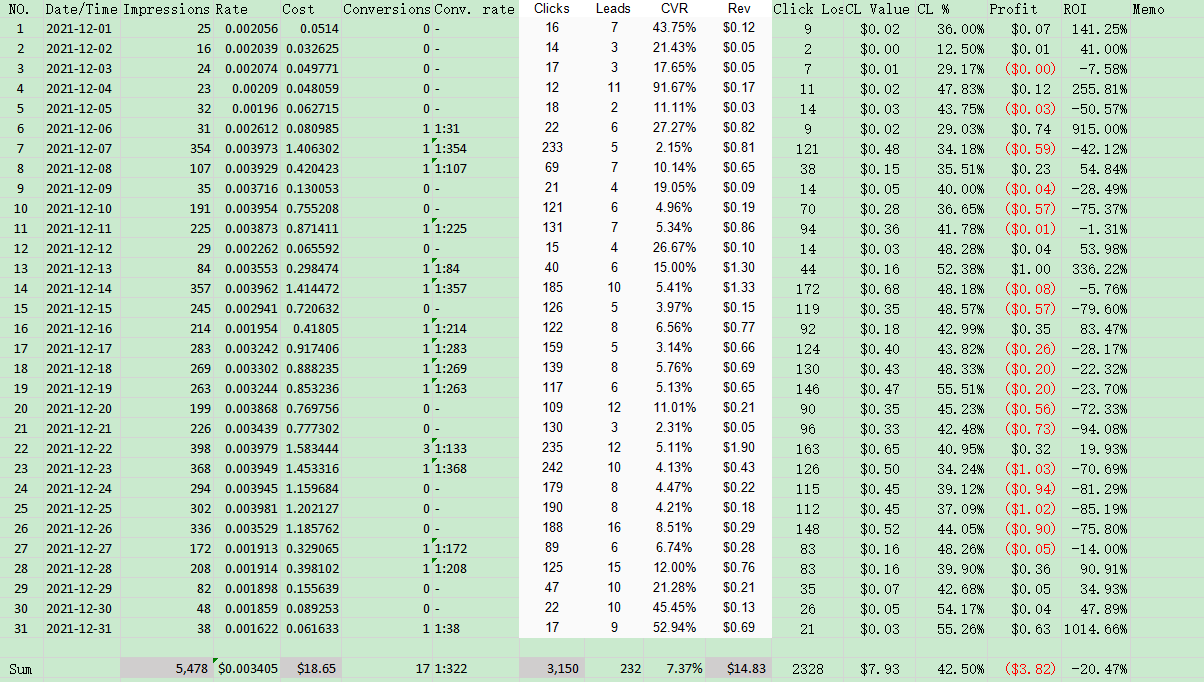 It is a smartlink, so the offers ars not fixed, there will be some changes. This also shows that the ROI has become worse, mostly because of the offers, as this campaign’s whitelist site traffic is relatively stable.

5). Bid
At the very beginning the campaign was out of the average bid, at more than $1, and the bid mode was smart bid. Because the campaign’s roi performance is not bad, in order to get more traffic, the bid was raised several times, $2, $3 and $4. After going to $4, the conversion was there, but the traffic cost was too high, so I started the operation of lowering the bid again. Finally, set at $3, which is 2-3 times higher than the average bid.

2). Look at the long term and not the short
There are only 2 sites in this whitelist, one of which has a relatively small traffic, so these two sites can be considered as one site, which is more convenient for testing traffic. This campaign is not profitable every day, and there are many consecutive days that are loss money. But we know that this site is a whitelist site, is a good site, even if the temporary performance of a few days are not good, there is no need to make it blacklist, can be observed for a period of time, to seize the good station does not let go. Maybe encounter a good offer, it will come back from the valley bottom.

3). Profit is the father of profit
It is said that loss is the mother of profit, do not treat losses as losses, but as costs, as money to buy data, but even if there is a profitable campaign behind, if the profits generated are not enough to cover the money lost in the previous test, then it is easy to fall into the dilemma of the more you go on, the more you lose, and finally lose confidence.
This campaign is profitable from the beginning of its creation, and has accumulated some profits by the time it reaches the front, so when it doesn’t perform well for a certain period of time, it is stable and won’t be rushed to adjust or stop, and it will be a good day again when it passes through that valley stage.
From the negative ROI optimization to positive ROI is very good, but a good father (campaign profits), a birth in Rome, then many things should be easy and much simpler.

PS: The data and conclusions are for this campaign for a specific time period and situation, they do not represent the general situation and are for reference only.